Skip to content
Who were my Heroes? My Parents.

Who were my Heroes? My Parents.

I was fortunate to have both until early adulthood. I am acknowledging them now because their birthdays are close to each other. Mom’s birthday was January 30 and Dad’s is February 4. Dad lived 33 years longer than my mom.  Dad also has six -count ‘em – six of his ten siblings who also have birthdays in February! Seven kids in one family who have birthdays in one month! And another sibling with a birthday in late January.

Dad, the college football All-American and professional football hall of famer; Mom, the elementary teacher and one of the first Black teachers to help integrate Columbia Public Schools, were very influential in my younger years.  They met at the historically Black college, Lincoln University in Jefferson City, Missouri. Mom was a scholar and cheerleader, and dad the sports hero.  Both earned their master’s degree in education at the University of Missouri, the state school where my mother could not attend in the early 1950’s because of her race. Yet, mom would become a member of Alpha Kappa Alpha Sorority, Incorporated in 1952 (Alpha Iota chapter) and later become one of the founding members of the alumni chapter Kappa Chi Omega at the University of Missouri in 1976.  Yes, also a member of that sorority is our nation’s Vice President Kamala Harris! Dad was a member of Kappa Alpha Psi.

My mother kept our family treasures and photos.  One of my favorite photos of them was taken while they were on vacation in California.  Mom titled the 1962 photo “Somewhere on the Sunset Strip.”  That photo was indicative of their spirit and joy. But man did they party!  I remember because they often had parties at our house! 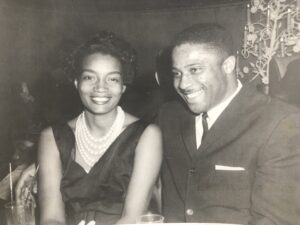 My Heroes. Mom and Dad could be serious as well. They were always looking for me to bring home the stats.  No- not from my sports exploits and achievements, but the numbers and letters on my grade cards!