Golf and the Lewis Heritage

The Masters is one of the most iconic sporting events in American history. It is one of four professional men’s major golf events heralded by Professional Golfers’ Association and PGA Tour as the grandest.  The professional golf event is nostalgic because it is always held at Augusta National Golf Club in Augusta, Georgia – unlike the other majors that are contested at different locations each year.

This spring, the media networks made viewing audiences extremely aware of the PGA and its Tour event. The Golf Channel excels in its programming of historical segments about golf, its past accomplishments and especially in April, its historical accounts of the Masters tournament. Part of its presentation showed segments of past tournament winners and acknowledges its history of exclusive practices toward people of color.

This year’s event started on April 8, honoring Lee Elder as one of three honorary starters, along with legends Jack Nicklaus and Gary Player.  The symbolic occasion honored Elder as the first African American to play in the Masters in 1975.  Viewers saw very few historical accounts of how the sport reflected social sentiment especially in most public events such as in Augusta.  Nor did it explain how other socially determined people of color such as Lee Trevino and Chi-Chi Rodriguez were given the privilege of playing in PGA events in the 1960’s and 70’s before Elder.  Yet, it was so cool to see Hideki Matsuyama from Japan win this year’s Masters tournament as the first from his country. The win was also his first major after over 10 years as a professional.

Not until recently did the PGA determine to end its practice of scheduling tournaments at golf courses that demonstrated exclusive rules prohibiting people of color from being members or playing at those courses.  Until the mid-1988’s, African Americans were seen as only caddies at the Masters and it was a rarity to see golfers compete on the course.

Golf courses in the State of Minnesota were noted as having similar practices.  However, my grandfather, Leo Lewis, Sr., was a prominent participant in African American golf circles around the Twin Cities.  He participated in the Minnesota Negro Open Golf Tournament, originally held at what is now Francis Gross Golf Course in Minneapolis.  The tournament was also contested later at Theodore Wirth Golf Course in the early 1940’s. Dwight Reed, my father’s college football coach; while he forged a path as a football player and coach, also played in the tournament. Former Heavyweight Boxing Champion Joe Louis was a participant in 1957.

The event was renamed the Upper Midwest Bronze Golf Tournament from 1955-1986.  It still attracts minority golfers from around the country and is now called the Bronze Amateur Memorial Golf Tournament. It is scheduled this year on Saturday, July 31, 2021 following a junior golfer event scheduled for the day before.

My grandfather was one of the founders of the Midwestern Negro Open Tournament in Des Moines, Iowa.  In its first year, held on July 20, 1931, he came in second posting 152 after losing a playoff in the event. His brother, Homer came in third place. Members of the Lewis Family are scheduled to celebrate grandfather’s participation in the tournament. Now 90 years later, we have plans for a ceremonial golf weekend later this summer.

I found the earliest accounts of my Grandfather and Uncle Homer competing in golf starting in 1930 in Des Moines.  They were members of the Alpha Golf Club, the only Negro golf club in the state and a traveling team that would play in cities such as Kansas City and Waterloo, Iowa. Alpha Club’s home course was Grandview Golf Course now called Bright Grandview in Des Moines.

My Father and some of his brothers were avid golfers. Uncle Elmer still has Grandfather’s putter – an item that is now over 80 years old!  Uncle Bobby still plays on occasion and will hopefully join us this summer for our celebration.  He frequents Como Golf Course in St. Paul but will play anywhere you ask him!

For as long as I remember, Dad participated in golf.  He played while a professional football player and travelled to various locations around the country to play with friends after retirement.  He was part of numerous contingents from Minnesota and Missouri, that headed to Arizona or Florida for golf getaways.  Dad would always have his clubs in the trunk of his car.  Even as we embarked on family road trips, his clubs were usually packed first.

Dad also coached the men’s golf team at Lincoln University.  He frequented several charity events when he retired.  He and my brother Barry would partner in local events in Columbia. Barry was also a high school golfer competing for the varsity team.  Fortunately, Dad was able to participate in several of my youth foundations’ annual charity golf event. 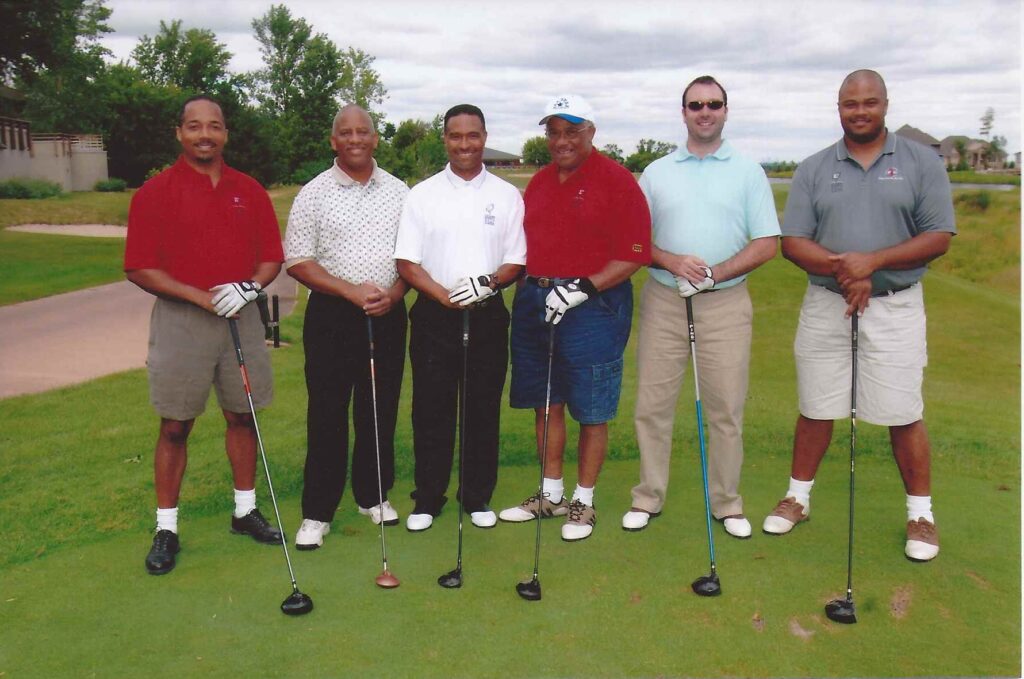 I cannot remember growing up with friends who played golf. It took me a long time to understand why someone would want to carry their heavy leather golf bag for four hours in the hot Missouri sun! Golf also looked very difficult to play! Ultimately, it just was not a sport that was popular in my community and especially for young African American boys.

When I grew up, the golfers I saw were friends of my Dad’s and other black men, but it appeared that it was just that – an adult game.  My mother did not have clubs and it was a rarity that I saw girls or women play.  As a youngster, I was curious about what it was about golf that would attract a person to view it on the television.  At the time, I could not imagine how watching golf could keep someone interested.  Now I know why it is such an interesting sport to watch.  I learned to appreciate professional and collegiate golf on the television networks through playing the game.

I now believe that most physical activities are popular only because they are accessible or led by trusted role models.  Today’s young people are exposed to and are provided access to a variety of sports opportunities.

I am an avid golfer now because other activities are much more difficult for me to enjoy.  Gone are the days of playing basketball at the Flagship – the health club in Eden Prairie that was eventually bought by Lifetime Fitness.  Gone are the days of competing as a squash player around the Twin Cities and statewide.  Squash is the most challenging sport I have ever played!  I was very active in each sport after my football playing days!

Gone are the days of jogging to stay in shape. I now walk, bike and or swim.  And of course, I play golf – because for me it is the most difficult yet challenging game to experience. More importantly, it is a Lewis thing, with a heritage and history of involvement started by my grandfather.