I played organized American football for over 20 years. Choosing to play the sport of football in my hometown was likened to a “rites of passage,” for boys and a way to fit in the broader American culture. It is what some American males still see as an attractive endeavor that allows them to show their courage, stamina and to build their identities. Throughout those years of competitive sport there were more coaches that I liked than disliked. Some I considered mentors and leaders, yet, accepting them did not go further than that.

For example, my ninth-grade basketball coach was a dud. His temper was so bad that sometimes he foamed at the mouth when he was upset. My high school football coach, Tom Travis, changed me from running back to quarterback when I tried out my sophomore year at Hickman High School in Columbia, Missouri. He was fair and let you earn your spot on the team. He had a lot of favorite players because we won a lot of games! My college quarterback and wide receiver coaches were not holler guys but like my pro coaches, most of them articulated the game of football well. Most often, they allowed me to demonstrate my best attributes of quickness and sure hands. I was then able to take advantage of the opportunity!

When I played for the Minnesota Vikings, I believe there was no coach I respected more than Jerry Burns. Burns died May 12, 2021, at the age of 94. I first met Coach at the initial practice of training camp in 1981. After a morning receivers meeting, I was told by the receiver coach Les Steckel that at the beginning of the practice session, I should simply follow teammate Ahmad Rashad and the others in warm-ups and for the subsequent running game part of the offensive practice. It was before the first play of offensive team practice that I first met Burns. I heard a gruff voice come from someone who was walking out of the starting unit’s huddle. Appeared was a short thin stature of a man who apparently demonstrated his control over the players with interesting and creative language! It worked because the offensive unit would react on every word of Burns’ direction. I did not know at that time that Burns was the offensive coordinator. As I would quickly understand that summer, Burns’ iconic voice would resonate in a meaningful way for me. 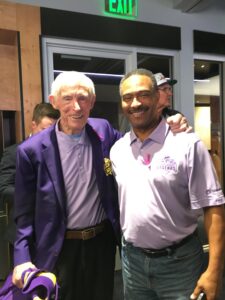 As I remember how the 1981 preseason started, I was elated to be given another chance to show my talent at wide receiver. However, I was realistic about my chances of getting a measurable amount of playing time and felt that I was just an afterthought in terms of my value to the team. I signed a contract after the spring minicamp that year and was wondering if my brief career in professional football was over. Afterall, I was cut after two previous years of training camp with the St. Louis Cardinals and a brief time of the regular season in Canada for the Calgary Stampeders.

Pro football’s practice of signing players after the draft and minicamp is still seen as only an attempt to fill the training camp roster to an allowable number. I ultimately became a practice player with no real prospect of making the opening day roster for the regular season. Proof of that was evident in the number 46 on my jersey!

What was it about Burns that made him so successful as a leader? The man coached in six Super Bowls! He, like most coaches in his position as coordinator was highly demanding. He often would offer colorful ways of expressing his expectations. He had no problem calling you out if you made mistakes. His play calling and strategy was simple and easily understandable. Yet, Coach became more innovative in his approach to game planning. The remainder of the League would follow with their own versions of Burn’s offensive approach.

One notable coaching strategy of that era in the National Football League was the offensive formation of putting four players in receiver positions that flanked away from the linemen. Those offensive formations included tight ends and running backs positioned in uncharacteristically different alignments. Formations also positioned receivers in two-point stances instead of three-point stances, especially on the line of scrimmage. This new period in the NFL was before the game moved to the technical and analytic showcase that it is now.

Jerry Burns and head coach Bud Grant were long-time friends and were instrumental in giving me a chance to try out for the Vikings. I did not know how well Burns was connected to the Grant coaching legacy at the time. As it has been documented, their relationship goes back to the mid 1950’s when Bud was hired as head coach for the Winnipeg Blue Bombers and where my father was a player. Burns was an assistant coach at the University of Iowa at that time. He was instrumental in helping Grant in his new position as head coach for Winnipeg at the age of 29. Sometimes he served as a summer guest coach for Bud.

Burns would also be the conduit for several Iowa players to be signed by Bud and the Bombers. One of those players included Frank Gilliam, who started at end for Bud in 1957. After a brief professional playing career, Gilliam would then work in the Vikings front office in player personnel for over 30 years.

There are many Jerry Burns stories, and there should be, for a coach who coached for the Vikings for over 20 years and spent a lifetime in football. I am personally thankful for the opportunity to be coached by Jerry Burns and the respect he had for my talent. In an addition to being a punt returner later in my career, Burns showed tremendous confidence in my ability to make the correct decisions on the field. If it was up to him, I should have decided to fair catch each punt, because it was a greater chance of us keeping possession. He rarely believed that running with the ball after the catch was worth the risk compared to signaling a fair catch. A worse outcome was allowing the ball to drop on the ground. It almost always results in the ball rolling further down the field, giving the kicking team additional advantage in field position. 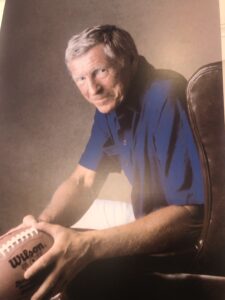 Jerry Burns, like many of the people I have told you about over the last few months, was one of a kind. He certainly was one of my favorite coaches. Just ask the hundreds of professional and college players who benefitted from his amazing football knowledge. He was a leader that I listened to and followed. He was funny at times, but was serious as well, and wanted to win every game he coached. As he would say often in our meetings regarding his offensive football philosophy, “You won’t go broke making a profit!”