I recently watched the new movie “One Night in Miami”, which began streaming on January 15th. Jim Brown, the only one still alive of the four iconic African American men played in the movie served as a consultant directed by veteran actor Regina King. The characterizations of Brown, Muhammad Ali, Civil rights icon Malcom X and singer Sam Cooke occurred one night after the young Ali won the heavyweight boxing crown from Sonny Liston.

Jim Brown is the NFL running back who left the league to go into acting when he was considered “still in his prime”.  He ultimately starred in several unforgettable movies, but he will be remembered for his unmistakable prowess in the league.  I was fortunate to meet Jim while attending a charity golf event hosted by my college roommate and teammate, Kellen Winslow.  Kellen’s charity was supporting Sickle Cell Anemia. Due to his enormous popularity in San Diego as a perennial all-pro tight end and now an NFL Hall of Fame member, the event attracted several A-list celebrities. I was there as a current player but more importantly joined Kellen for the weekend festivities. Jim and I conversed while we were waiting in a bus to be taken to the celebrity golf event.  He remembered my name mostly because he knew of my father.  They were contemporaries in the game although dad played in the Canadian Football League.  Both of them were college All-Americans and their professional careers peaked at the same time – Jim retiring in 1965 and dad in 1966.

What made the occasion great was the jazz concert performed by one of my all-time favorite saxophonists, George Howard.  Howard and his band played for two hours that evening during the gala.  The jazz world would not be blessed by his talent for long since he was beset with cancer and died in 1998. 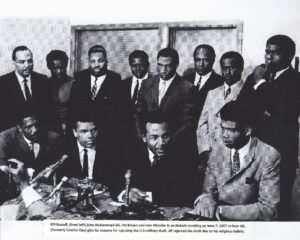 This photo was sent to me many years ago by an associate.