The year 2020 was unforgettable for me and I am sure it was notable for most of you. I will refrain from the discourse that is often focused on the devastation of the COVID-19 crises. But I had the opportunity to reflect on my former teammates with the Minnesota Vikings because several of them died in 2020. I am often reminded of my long-standing relationships that I have with teammates from all my sports teams. I am willing to accept the inevitable and relative short life span that I am given. The deaths of my Minnesota Vikings Teammates, Matt Blair, Chris Doleman and Terry Tausch however, added to my daunting perspective that the years are becoming fewer as they go by. I also lost a high school basketball teammate last year, Darryl Jordan, in my hometown of Columbia, Missouri. None of them were COVID related, but they all died of diseases that are common to men in our culture. However, I am often involved in ongoing discussions about whether playing sports contributed to their demise or helped them live longer?

Shortly after Matt passed away in November, I reflected on my relationship with him and my other Vikings teammates. Matt was the first teammate I met when I signed as a free agent in 1981. He had just finished a workout – the day before training camp – and apparently was the only player at the Vikings’ Winter Park facility in Eden Prairie at the time. I never saw an outside linebacker that tall before! His broad shoulders and long legs were obviously his best physical attributes. More importantly, he was a great leader and teammate!

Chris Doleman, who played college ball at the University of Pittsburgh, had a similar body composition and playing style for the position at that time. He may have been drafted as Blair’s apparent replacement, but he had a tremendous career while playing for three teams. It was good to see him back with the Vikings in 2000 before he retired. Unlike Matt, current NFL players with his type of stature and talent are now playing down in a three-point stance as a pass rusher, as did Chris most of his career.

Terry Tausch was a quiet, unassuming guy who looked as if he was glad to be playing ball. Not a holler guy nor rebel rouser, but he will be missed. I am glad I was his teammate.

As I look back on my first team photo of the 1982 team (I missed being in the 1981 team photo), our success during the season afforded us to make the playoffs despite being affected by the NFL players strike that year. Due to the strike, we took the official team photo late in the season. Missing in the photo was Ahmad Rashad. He was injured in a game prior to the photo being taken and did not play in the post season. He ultimately retired that year. Eight players on that team have died! Draft choice Brian Howard (24), Dave Huffman (56), Fred McNeil (54), Keith Nord (49), Curtis Rouse (68), Terry Tausch (66), Matt Blair (59), and Wade Wilson (11).

Boy, I think I know more people who are dead than those who are alive! 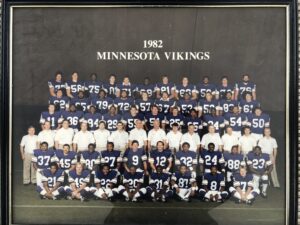