Skip to content
Ronald Townson; One of five, yet one of many

Ronald Townson; One of five, yet one of many

When my parents were alive, they often expressed to me that they were blessed. Unfortunately, Mom died of cancer at a relatively young age.  Dad fell victim to several ailments including heart surgery, double knee and hip replacement surgery and kidney disease. But my remembrance of their lives was one of pride and appreciation. For example, they both received advanced college degrees in the 1960’s and were educators and mentors of young men and women. They never pushed me into sports and always reminded me of the value of achieving good grades in school.

However, most of what I remember about the way they lived their lives, was reflected in their attitude and demeanor around extended family and friends in our town, Columbia, Missouri.  They associated themselves with several civic and community groups and always looked like they were having a lot of fun!

Part of their life legacy is also reflected in their friends from sports teams. But rarely did I take the opportunity to understand how important those relationships were.  Regrettably, my parents are not alive to share more opinions and memories of their significant relationships because I still have a multitude of questions that need to be addressed.

Fondly, I have sought out those few friends and family members who are now elders, and who spent considerable time with my parents. It is gratifying to capture their perspectives on what it was like to befriend one or both of my parents.  More importantly, often when I listen to the stories about my parents, it is who my parents were to their friends and family, not what they did as public servants that captivates my attention the most.  I have also relied on family photos that bring to life occasions gone by.

Last month, the weekend program CBS Sunday Morning showed a segment about two members, Billy Davis, Jr. and Marilyn McCoo, of the popular 1960’s and 1970’s singing group The 5th Dimension.  Along with Ronald Townson, Lamonte McLemore and Florence LaRue, it appeared appropriate that the five-member vocal group have such a name. Davis, Jr. and McCoo served as lead vocalists for the group and eventually married while members. The program segment on CBS revealed that they are still recording songs! The segment reminded me of the time my parents met members of the group at a social gathering.  So, I went to my family photo archive to retrieve the photos. 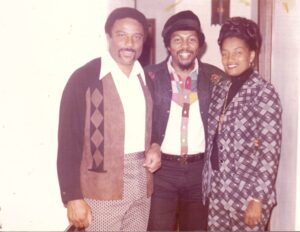 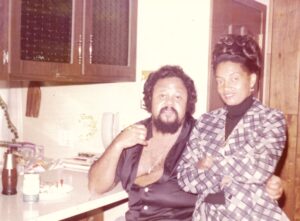 Ronald Townson and Doris Lewis circa 1974

Group member and co-creator of the group, Ronald Townson, had more than a casual relationship with my parents. Townson was also their college classmate at Lincoln University in Jefferson City, Missouri. It was also special to find out that dad and Mr. Townson were teammates on LU’s 1953 football team. The team would end the season undefeated and extend its winning streak to 22 games. Townson was a running back but also was a member of the concert choir at Lincoln.

Townson’s exceptional talent as a singer was evident by his long-standing membership with The 5th Dimension. The group accomplished world-renowned success.  Ronald Townson and Billy Davis Jr. were natives of St. Louis, Missouri. 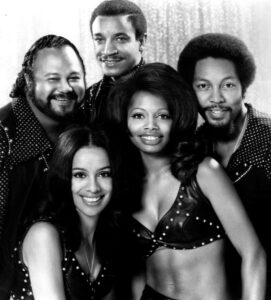