I was saddened to hear that Irv Cross died in February.  I grew up knowing about Irv mostly through his television role as a sports analyst for NFL games. He was considered the first African American on-air national broadcasting sportscaster for NFL games -mostly through CBS NFL Today’s sports coverage. Only a few years earlier did Cross reveal that he had bouts of memory loss.  He decided that after his death that he would request his brain be donated to scientific research focused on dementia, believed to be related to his playing days in the NFL.

His humility was obvious when it was important to be balanced on air and to convey trust to fans and viewers.  Certainly, as a former player and African American serving a role in one of the most conservative institutions in America, proved unique even in the world of sports programming in the 1970’s. He broke barriers in the industry that now offers diverse perspectives in American football television programming.

Fortunately for Minnesotans, Irv and his family chose to take the Athletic Director position at Macalester College in 1999.  I first met him when my youth Foundation sponsored football camps on Macalester’s campus each summer. We were welcomed with open arms and Irv wanted to make sure that we were supported as we provided activities for underserved youth in our state. 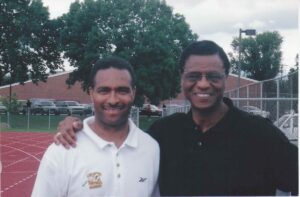 I believe Irv Cross’ greatest achievement was spearheading the construction of Macalester’s new sports and activity spaces – buildings that would eventually open after he left the college. However, he mentored me while I was an associate athletic director at the University of Minnesota. His experiences in sport were also unique in that he went from a symbolic corporate model employee to leading an academically liberal arts college. He would move on to head Big Brothers/Big Sisters of Central Minnesota as its executive director.

Macalester College has a unique history of African American leadership.  In the late 1940’s Earl Bowman was a star student athlete and returned to the college to be an administrator. Don Hudson the first African American to be a head football coach at the high school level in Minnesota worked with Bowman in Minneapolis Public Schools.  Later, Hudson became the first African American head football coach of a majority white college in the 1970’s. His family stated in his obituary that the college was called “Blackester” by other institutions because Hudson was successful in recruiting black student athletes to the academically rigorous college. Hudson would then go back to Lincoln University -where he was a student and my dad’s college teammate – to become the college’s next head football coach in 1976 after my father ended his football coaching tenure there. Hudson would pass away in 2018.

Well known African American leaders of today experienced significant years of their leadership paths at Macalester. They include Sharon Sayles Belton, the first female and African American to serve as the mayor of Minneapolis. Professor Mahmoud El-Kati, the sage of scholarly work on African American history including a unique stance and ideology about the African American athlete, spent time at the college until his retirement. Currently, Donnie Brooks holds the reins as Athletic Director of the college.

I was fortunate to introduce Irv Cross as the keynote speaker at the Winfield Awards banquet in 2000. He is included in the list of the Twin Cities’ most notable sports icons who served as lead speaker at the well-known high school athlete awards event named after major league hall of famer Dave Winfield.

Another sports Leader has passed, yet he graced us with his presence. I am a better sports leader because of Irv Cross.